One hundred and thirty-five churches responded to an offer to purchase cases of Strength for Service books for presentations on the 15th anniversary of the September 11 attack on the Pentagon and the World Trade Center.

At a minimum, churches gave away 7,000 copies of the books of daily devotions to first responders or military troops. 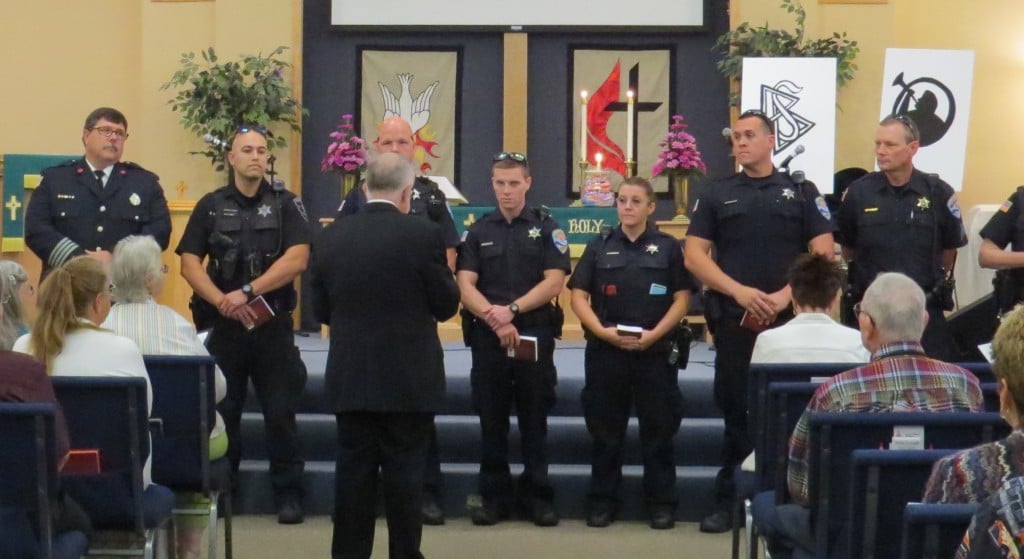 On the 15th anniversary of the terrorist attacks on 9-11, First United Methodist Church in Portage, Ind., honors members of the Portage Police and Fire Departments by presenting representatives with copies of Strength for Service to God and Community.

On September 11, men of Lake Norman United Methodist Church and Webb Chapel United Methodist Church in Denver N.C., hosted a Strength for Service program and gave out 75 books to first responders. Rose Hemmeric, a survivor of the attack on the World Trade Center, was the guest speaker. Fifteen years ago, she was trapped on the 63rd floor of Tower 1. She was lead to safety by a team of firefighters who went back up the stairs. She never saw them again.

Since March 1, the non-denominational ministry has distributed 19,938 copies of the pocket-size books. Some of the books were provided by World Wide Technology. For example, the St. Louis-based company sent 3,300 copies to Sailors and Marines based in San Diego.

Most of the books were purchased by churches of all denominations for military posts, fire stations and police departments.

The Rev. Richard Hartman, chaplain of the 400-member Fort Wayne (Ind.) Police Department, likens giving Strength for Service to God and Community to police officers to “putting God right there in the midst of things.”

“Many officers ride alone in their squad cars with minimal face-to-face interaction with other officers; theirs cars are their offices,” said the chaplain. “Providing copies of Strength for Service on the front seats is one way to offer support.”

Read more about the presentations here