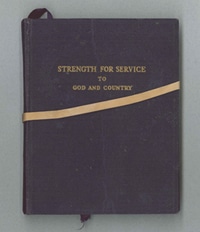 I was first introduced to the Strength for Service to God and Country (SFS) book of daily devotions in the late 1980s. My wife, Amelia, gave me an original edition, which had belonged to her grandmother. At the time, I was a first lieutenant in the Marine Corps and had just received my wings as a naval aviator. Being an avid reader with an interest in antique books, the book had a certain appeal.

Published in 1942 with a now faded blue hardback cover, the book was in average condition for its age. The binding was intact but loose. The pages were aged and slightly yellowed with numerous notes in the margins. The inside of the front cover bore no inscription, but someone had obviously used it routinely. The book had a slight musty odor frequently experienced in old bookstores. All in all, not a very noteworthy addition to what I envisioned to be a growing personal collection of antique books.

My initial assessment, however, could not have been further from the truth. As the years passed, I became very attached to that small blue book. In fact, it became a permanent companion in my daily devotions. Eventually, the binding of the book failed and I resorted to containing its pages with a rubber band . . . but I am getting ahead of myself. Let me go back to the beginning. 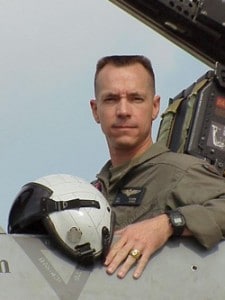 My small blue book appears to have been created sometime in 1942. I cannot say how it came into the possession of my wife’s grandmother, Maggie Belle Crenshaw, but the Crenshaw family has a rich military history dating back to the American Revolution. I speculate that it was actually owned by my wife’s grandfather, Thomas Crenshaw, who was a newspaper man in Columbia, S.C. Though he never served in the military, Thomas dedicated his life to public service.

The book eventually came into my wife’s possession and she passed it along to me. The book went with me during my first operational deployment aboard USS Coral Sea in 1989; however, it didn’t get much use. In retrospect, opening it and contemplating its contents certainly would have encouraged me. Had I done so, I probably would have handled my first experiences with overseas military service quite differently…

Likewise, the book traveled with me to Shaik Isa, Bahrain for Operation Desert Shield and Desert Storm in 1990-91, but it didn’t get much use there either. I recall returning rather shaken from one mission in particular where my flight had successfully dodged multiple Iraqi surface-to-air missiles while egressing from the target area in Kuwait. But, even this experience did not prompt me to explore the contents of my little blue book. Again, in retrospect, I think I would have handled my first encounters with actual military combat differently if I had been familiar with the book’s contents; or better yet, if I had possessed a personal relationship with the Lord.

This story continues much the same for the next nine years as I continued my service with the Marine Corps. During those years I deployed twice to Japan and once to South America. Our family also completed four permanent-change-of-station moves. Throughout, there was a great deal of stress and upheaval, both personal and professional, but not a lot of time spent with my little blue book.

I had accumulated over 2,000 hours of flight time and earned all the flight leadership qualifications possible in the FA-18; but spiritually, I was on a dead-end street. In other words, from the perspective of military achievement, my “net-worth” was high, but spiritually my “self-worth” was extremely low. 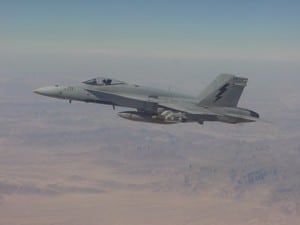 The old is gone, the new has come

Finally, in August of 1999, I arrived at the Marine Corps University in Quantico, Va., to attend the USMC Command and Staff College. The college provides a wonderful opportunity for mid-grade officers to explore military service from an academic perspective. It’s also a great chance for young officers to take a break from the hectic operational deployment cycle. It provides an opportunity to get to know one’s family again. For me, it also provided the much needed to time just to think.

Early in the school year I discovered a quote by Socrates that reads, “The unexamined life is not worth living.” And as I examined my life and contemplated my past, as well as my future, I didn’t like what I discovered. Outwardly, one could argue that I’d been very successful with a bright future in the Marine Corps. Inwardly, however, was a different story altogether—I was spiritually stagnant. As I reflected upon my life, I realized that it was empty. I had no sense of joy or fulfillment.”

I slowly became aware that I had been living day-to-day for the acknowledgment and approval of others. My spiritual identity was validated by others who observed my behavior and works—some of which was good and some not so good. I realized that I had been endeavoring to find sufficiency in myself and had become overly concerned about the things that were temporary. I discovered that I knew the Truth in my mind; but my belief was being circumvented by my own lack of obedience and unwillingness to surrender my life and confess my sin. Eventually, almost begrudgingly, I acknowledged my absolute need for the Savior. That acknowledgment has made all the difference in my life.

It was during this awakening process that I discovered the treasure trove of encouragement, inspiration, and hope contained among the pages of my little blue book. Please don’t misunderstand: I’m not saying that the SFS devotional is or was the focus of my faith or a replacement for the Bible. Instead, I found this little blue book to be incredibly useful in my daily devotionals as a guidebook that contained a suggested Bible passage, a sermonette, and a prayer. Moreover, each entry was focused on service—a mindset and lifestyle with which I could identify. SFS helped lead me to my faith in Jesus Christ.

A life in Christ

After school, when I returned to Beaufort, South Carolina, for assignment in Marine Aircraft Group 31, I approached my military service from an entirely new perspective. Aside from becoming very involved in our church, I took an active role in rejuvenating a local Officers’ Christian Fellowship (OCF) group. SFS continued to guide my daily devotions.

In October 2001, just one month after the attacks of 9/11, I found myself serving as the executive officer of the VMFA-251 Thunderbolts, one of the Beaufort FA-18 Squadrons deployed aboard USS Theodore Roosevelt patrolling the waters of the North Arabian Sea off the coast of Pakistan. The squadron was serving in support of Operation Enduring Freedom. As in the past, my little blue book deployed with me, only this time its role in my life was much different. As in Beaufort, I led a small squadron Bible study aboard the ship. Then in November 2001, Lieutenant Commander Stewart, the ship’s Protestant chaplain, asked me to be the principal speaker at a Thanksgiving Day prayer breakfast. While relatively comfortable delivering public speeches, I had never given one on a spiritual topic. In preparation, I found SFS to be a valuable source of inspiration for the presentation, which I titled, “The Courage of a Nation.” The presentation centered on Joshua 1:1-9 and the Lord’s encouragement to Joshua as he prepared to lead the nation of Israel into battle.

In February of 2003, I found myself again serving in a combat zone as the commanding officer of the Thunderbolts. This time, land-based in Al Jabar, Kuwait, the squadron had deployed after a short eight-month turn-around to support Operation Iraqi Freedom. Needless to say, my little blue book once again deployed with me, but by now its binding had almost failed, and I feared that I would begin to lose pages held in place by a rubber band.

It was during the early days of the operation when I returned to our Squadron Ready Tent to discover an entire stack of newly published Strength for Service books. To this day, I do not know who supplied it, but I suspect one of the chaplain’s assistants placed it on my bench. Thanks to the efforts of Evan Hunsberger and UM Men, I could now share this wonderful devotional with other service members.

In 2004, I attended the Industrial College of the Armed Forces, which is part of the National Defense University in Washington, D.C. Like Command and Staff College, this year at school provided a break from operations and an opportunity to fellowship with other students and believers in Christ. We created a small OCF group that met every Wednesday morning, and we used the SFS devotional as one of our primary resources. UM Men’s staff was instrumental in providing sufficient quantities for the class.

In November 2007, I took command of Marine Aviation Training Support Group 22 in Corpus Christi, Texas. Today my original little blue book resides in a place of honor on one of my glass enclosed barrister bookcases. I am pleased to report that although the original blue copy doesn’t see much action anymore, my spiritual life certainly does, and I still start each morning with the day’s SFS entry from one of the newly published copies. Although now available in blue, tan, and green for the Boy Scouts, I still prefer the blue cover. Fortunately, I found my way off that dead-end street, thanks in no small measure to my little blue book.

While my collection of antique books hasn’t grown much since the early days of my career, the Strength for Service devotional certainly has made my collection richer for being part of it. More importantly, it has made my spiritual life richer. Today, I still continue to grow spiritually, but my focus is now on practicing the presence of God and becoming the same person in practice that I am in prayer.

Colonel Clark graduated from The Citadel in 1985 and earned his wings as a naval aviator in 1987. He currently serves as the commanding officer of Marine Aviation Training Support Group 22 at the Naval Air Station in Corpus Christi, Texas.