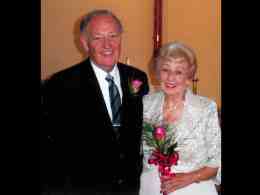 Cal Lackore and wife, Norma, celebrate their 2009 wedding at the chapel of Shepherd of the Hills UMC in Sun City West, Ariz. The couple met at a grief class at the church after each of them lost their prior spouses.

Raised on a farm near Rudd, Iowa, Lackore served as a journeyman electrician in a factory making farm tractors, He subsequently worked as an office equipment repairman for the Remington Division of Sperry Rand.

Later, he spent 25 years repairing computer terminals and mini-computers for the Univac Division. He finished as a senior data-processing consultant and launched a successful synthetic lubricant business in 1985.

Lackore was enrolled in an MBA program at Baldwin Wallace University in Berea, Ohio, when his major professor asked him for a transcript of his undergraduate degree. “I never graduated from college,” said Lackore. “Well, you have a 4-point grade average and obviously, you are qualified for a graduate degree, but we can’t give you one until you complete your college degree,” said the professor.

Lackore received neither an undergraduate nor a graduate degree.

The 80-year-old business leader lived in Brunswick, Ohio, for 32 years (1972-2003). During that time he served for 12 years (three 4-year terms) as a UMM district president for the East Ohio Annual Conference and as the UMM conference treasurer. He also attended seven National Gatherings of UM Men at Purdue University.

After moving to Sun City West in 2003 and being named president of Shepherd of the Hills UM Men, he attended the 2005 UM Men gathering where he was introduced to Evan Hunsberger, the Boy Scout who republished and expanded the 1942 Strength for Service to God and Country book for members of the U.S. Armed Forces.

“He is a remarkable young man,” said Lackore. “I was so impressed with his action and with the possibilities the book offers, in 2008, I led a Strength for Service financial campaign at the Shepherd of the Hills UMC.”

“I thought that Air Force officers might visit our congregation after they saw we were responsible for the books,” said Lackore, who serves as the outdoor greeter of members and visitors to the church.

Asked why he responded so generously, the Army veteran who spent 14 months in Korea said, “When God gives you a mission you have to respond.

“After I viewed the remains of the 2001 attacks upon the World Trade Center and the Pentagon, I wanted to do something for combatants.

“I read the September 11 devotion in the Strength for Service book titled ‘Chosen to Suffer,’ I saw how prophetic and appropriate it was and I wanted to help give the books to all members of the U.S. Armed Forces.

“I wish I would have had access to this daily devotional during my time in Korea,” said Lackore. “I want to nurture these young guys and no one can be with the all the time; this book stays with them.”