Roy, who also served on the Vinton Police Department for 11 years, died Oct. 27, 1977. His widow, Ruby, died some time after that. The book somehow wound up at an auction, possibly in Independence.

“I go to a lot of auctions,” Gary says. “I’m the type of guy, you buy a pile, you don’t go through it there and take what you want, you take it all home.”

A couple of decades later, Gary picked up the book, and read the inscription: “To Roy Krug from the Evangelical Ladies Aid of Dysart.”

Gary, a retired telephone technician who served aboard the USS Bristol in the mid-1960s, knew Roy – or a relative – would like to have the book.

A call to Eva Krug in Dysart led Gary to Glenn Krug, a nephew of Roy.

“Oh yes,” says Glenn, a retired mechanic and former streets superintendent in Vinton. “When I was 10 years old Uncle Roy took me to Chicago. He drove a truck for Elliott (Brothers Trucking) in Dysart.”

That would have been 1938. Roy later worked for a dairy, went into the service and worked at the ham processing plant in Vinton before becoming a policeman. While Glenn doesn’t recall that Roy was religious, he knows his father walked to church every Sunday.

“I think it was rather ironic that Uncle Roy had this,” Glenn says.

Now it will become a family treasure. After all, its daily devotions, as the introduction says, are “to strengthen and sustain you in those troubled hours when you feel a need that cannot be well put into words.”

This article is based on a report from Dave Rasdal, a reporter for the Eastern Iowa Life. 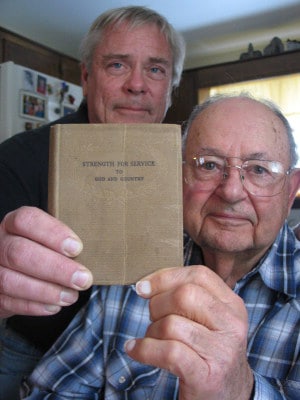 Gary Johnson (left) presents a copy of Strength for Service to God and Country to Glenn Krug, a nephew of the deceased World War II veteran who once owned the book. (Photo by Eastern Iowa Life).