A non-denominational ministry formed by the General Commission on UM Men is sending 1,000 copies of Strength for Service to God and Country to Sailors and Marines deploying from San Diego in October. 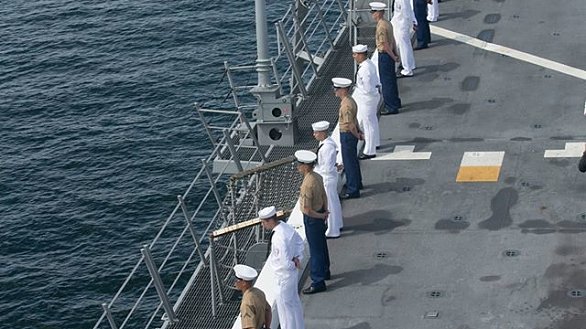 Marines and Sailors “man the rails” of the amphibious transport dock ship USS Somerset The marines are with the 11th Marine Expeditionary Unit and the sailors are with Amphibious Squadron Five. (U.S. Navy photo by MC1 Vladimir Ramos/Released).

Seventy-four years later the devotions written by 365 authors in 1942 and 50 contemporary authors will be read by marines and sailors deploying to defend their nation.

The books were requested by Chaplain Todd Delaney, command chaplain of the 1st Battalion of the 11th Marine Expeditionary Group, based at Camp Pendleton.

A total of 4,000 Marines and Sailors are ready to deploy accompanied by eight chaplains.

“I spoke with all the chaplains,” says DeLaney, “and we wanted to see if there is any way that we could get about 1,000 Strength for Service books to distribute while we’re on deployment.  I know that’s a lot, but they would be put to good use.”

DeLaney asked for the books to be sent to the chaplains of each ship.

“Thank you and all the folks at Strength for Service for all that you do for our troops,” says DeLaney. “We appreciate it more than you know.”