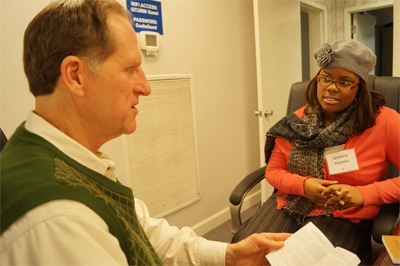 First responders often rush into dangerous situations to help those in need, but it is rare that anyone considers the needs of a first responder.  Recently hundreds of copies of Strength for

On April 30, 2013, Rev. Wayne Napier, who leads the Mississippi United Methodist disaster response, was attending a spiritual andemotional care retreat for disaster response coordinators at Vanderbilt University in Nashville, Tennessee. Napier took part in discussions regarding possible spiritual resources for first responders.  “Material likeStrength for Service would be helpful to the first responders of the many hurricanes, tornadoes and other storms that happen here in Mississippi.  Any way that we can support those aiding people in difficult times, we want to pursue that,” said Napier.

National director of scouting ministries for the General Commission on United Methodist Men, Larry Coppock explained that most people seldom contemplate how police officers, fire fighters and emergency response personnel are affected by the tragedies they see.  “First responders are going to face a lot of challenges whether it’s a disaster like Hurricane Katrina or the plant that blew up in West, Texas.  Many times they are not thought of and with hurricanes you can have a lot of devastation, deaths, grief and so forth and that can take a toll on first responders emotionally so this book has devotionals that address a lot of different situations and helps them deal with those things,” said Coppock.

Individual copies of Strength for Service to God and Community are available from Amazon or Cokesbury ($11.95 each). Twenty-five or more copies are available from Eight-Eleven Press ($7 each) (email request tospecialsales@edmondspmg.com).

Groups that want to purchase 1,000 or more copies of the book may have their name and group logo imprinted on the back cover. The cost of that service depends upon the number of books printed.  To read more about the book, visit www.strengthforservice.org.