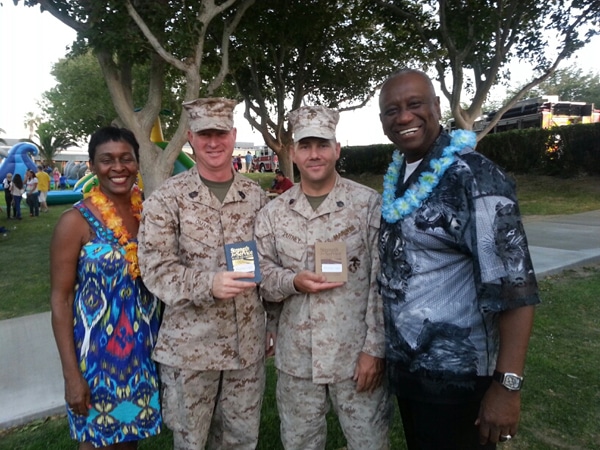 Approximately 800 guests attended the CFC kick off at the Marine Core Logistics base in Barstow, California on Sept. 27, during the Ohana Festival.

Larry Dozier, president of the Western Jurisdiction for the United Methodist Men, attended the event for Larry Coppock to expose the Strength for Service booklet to the charitable givers of the combined federal campaign (CFC).

This marks the first year that the SFS book was in the festival,  and the objective was to make givers aware of the  book, so they could have a chance to donate to the cause during the CFC period, (Oct. – Dec). The goal is to place a SFS booklet in the hand of every active member of the United States Military forces.

SSgt Joseph Putney, who coordinated the event, said that it was a good gesture to place the SFS in the hands of our military men and women. He saw a copy of the book and took one of the brochures.  Campaign Associate Betty Williams said the SFS idea is a good one and then offered a suggestion. “Place the CFC number (45689) right on the booklet,” she said. “That way, they will see it each time they pick up the book and this will help them remember when it’s time to donate to the cause.”

Of the various handouts available, the ball point pen and the tape measurer were favorites. Passersby took the brochures, too.  Everyone who had a chance to talk about SFS thought it was a noble idea. One attendee said, “This is a very good idea. At my church we pray for the troops every Sunday. I’m going to place Strength for Service on our prayer list.”

Music played throughout the campus as festival participants ate all sorts of Hawaiian fare. Children and adults alike played the many game on hand. They jumped into the foam game, crawled through the Ultimate Survivor, tumbled down giant water slides rode the waves as life-sized, plastic dolphins looked on and frolicked about.

The event ended with a live performance by dancers from the various Polynesian Islands. Audience members applauded the fire dancer throughout his performance.

Hostesses walked around and handed out leis to attendees.

The weather cooperated. Temperatures had been in the high 90s and sometimes triple digits the week before, but on this day, it was in the 70’s and 80’s with a cool breeze.