Dear Friend of Strength for Service,

Now serving as chairman of the National Fallen Firefighters Foundation, Compton told a group honoring 112 firefighters, “They aren’t heroes because they died in the line of duty. They became heroes the day they signed-up to be firefighters.”

You were probably not present on that October day in Emmitsburg, Md., when these fallen officers were honored, but you played a role in providing copies of Strength for Service to God and Community to firefighters who mourn the loss of colleagues.

At the same time, you played a role in providing books to police departments who lost 130 officers in in the line of duty during the first 10 months of 2016.

While shooting deaths are increasing at an alarming rate, the number one killer of police officers is suicide. Law enforcement suicide occurs 1.5 times more frequently than the rate in the general population.

Suicide rates are also on the increase among firefighters. The National Firefighters Foundation reports that in any year, a department is four times more likely to experience the suicide death of a member than a line-of-duty death.

Both police officers and firefighters receive the finest equipment to meet their physical needs, but cities are ill equipped to provide them with emotional and spiritual support.

Strength for Service books won’t end the suicides and they can do nothing about the line of-duty deaths, but they can let these community servants know their service is appreciated. Since each devotion tells the story of a first responder who found spiritual strength in a stressful situation, readers can identify with the subject and offer prayers to the same source of strength.

International Firefighters Day is May 4, 2017, and National Police Week is May 14-20, 2017. This would be a perfect time to honor first responders in your community.

Invite your church, a civic organization or a local business to provide at least one case of 52 books to these too-frequently forgotten community servants. You have plenty of time to secure the $300 (a 35% discount) before the April 1 deadline to order these books.

I am grateful for your past support and I look forward to receiving your order to be followed by an article and photo about the book presentations. 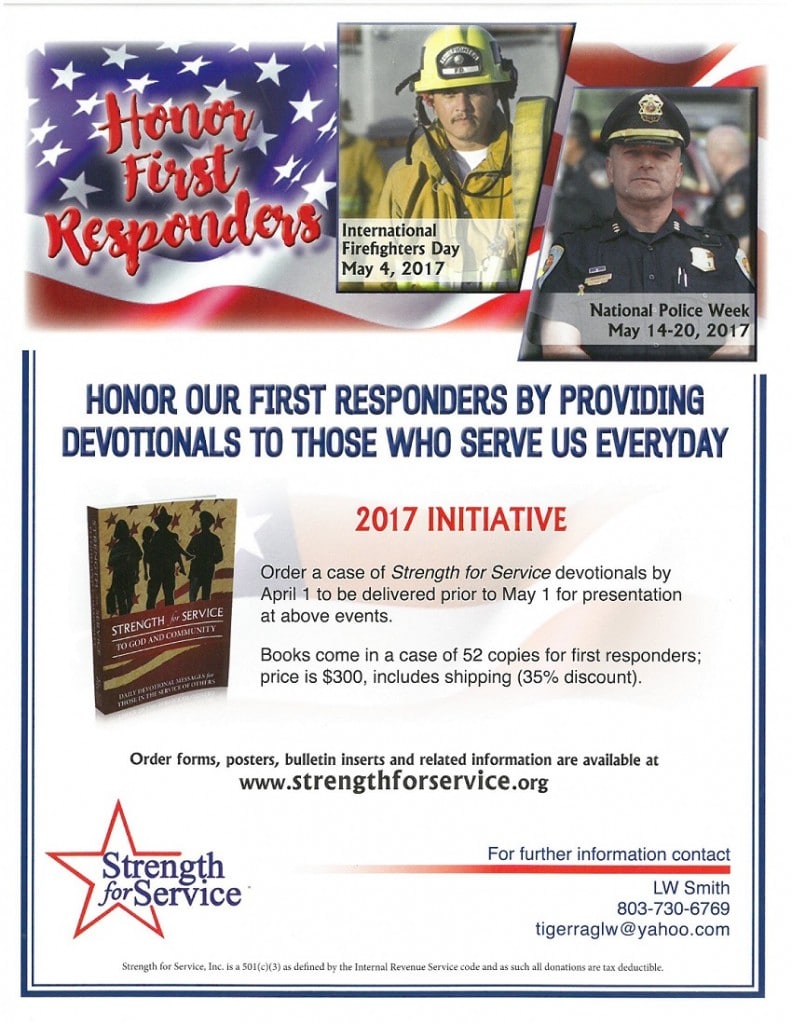