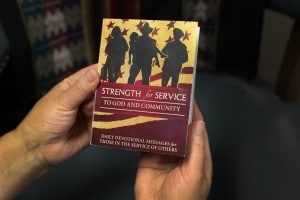 WEST, Texas–– Dennis Rejcek, a district president of UM Men in the Central Texas Conference, delivered 200 copies of Strength for Service to God and Community to first responders in West, Texas, site of an explosion in a fertilizer plant that killed 14 first responders.

Rejcek, who has relatives in the area, says he reviewed strategies for delivering the books with the Rev. Jimmy Sansom, pastor of West UMC. He then went to West Fire Department, where five of the volunteer fire fighters died in the explosion. “We reserved a book for a firefighter who is the son of one of the firefighters who lost his life,” said Rejcek. “I was invited to meet the fire chief in command and he was so grateful.”

Rejcek says he also met with two of his cousins. One had lost his home in the explosion and the other was assisting those displaced by the explosion. “It is amazing how many people are in service to others,” he concluded.

The Commission on UM Men sent 100 books for first responders in Boston. The Rev. Laura Everett, executive director of the Massachusetts Council of Churches, quickly made arrangements for congregations to receive sample books upon request. Those churches may order additional copies as needed.

On Sunday, April 28, Royston Bailey, president of New York Conference UM Men, will present 250 copies of the devotional books to first responders in Newtown, Conn., site of the Dec. 14 killing of 20 children and eight adults at the Sandy Hook Elementary School.

First responders will receive copies during a morning worship service at Newtown UMC and Bailey will make subsequent deliveries to the Newtown Police Department and the Newtown Fire Station.

A total of 1,700 first responders in the Nashville area will receive copies of the book for public servants as the result of a $10,000 gift from another benefactor.

Those books are in the process of being printed with the name of the benefactor on the back cover. No final date for the presentation has been scheduled.