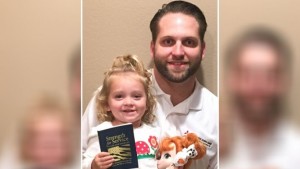 Evan Hunsberger, 29, seen here with his daughter Caydence, has worked tirelessly since the age of 13 to reprint and distribute “Strength or Service for God and Country.” (Courtesy of Evan Hunsberger)

Evan Hunsberger was just 13 when his grandfather suffered a stroked that meant he would never be the same again. But the boy made an unexpected discovery among the two-war veteran’s belongings that changed his life and gave inspiration to a new generation of American soldiers and sailors.

It was 1999, and Hunsberger, a Boy Scout, was somberly helping his grandmother sort through former Navy Corpsman Gene Hunsberger’s possessions as he prepared to move into a Southern California nursing home. A book his grandmother was about to throw away caught the boy’s eye. It was called “Strength for Service to God and Country,” and the veteran had carried during his service in both World War II and the Korean War. Knowing that the book he now held in his hands had helped his grandfather through difficult times, the boy got a little idea that would soon become a big one.

“I wanted to republish book that brought him so much comfort when he was in harm’s way,” Hunsberger recalled to FoxNews.com. “I asked him, ‘Papa I am going to publish this book, and do I have your blessing?’

“He said, ‘Evan this is a great blessing and you have my full blessing,’” Hunsberger said.

“Strength for Service to God and Country” was originally created around 1942 and given to service members for daily devotionals they could read and meditate on while in the field of battle. One million copies of the book had been distributed before it fell out of print in the 1950s.

“It’s great that a young person would want to take on a project like this. He could have done something much simpler for his service project but he stuck with it.”
– Larry Coppock, the Strength for Service Corporation

Over the decades, the book also fell out of circulation. But motivated by his bid to earn Eagle Scout and inspired by thoughts of his grandfather reading from the devotional on the battlefield, Hunsberger set out to have 5,000 new copies published to send to Marines at Camp Pendleton. Hunsberger finally found help when he reached out to the General Commission on United Methodist Men.

“It’s great that a young person would want to take on a project like this,” said Larry Coppock. “He could have done something much simpler for his service project but he stuck with it.”

Coppock’s group and Hunsberger former the Strength for Service Corporation, which updated the devotional to make it more non-denominational and had 25,000 copies printed.

“We had to take the original book – scan each page into the computer and then edit each page because there would be errors, mistakes, etc., that we would have to retype,” he said.

After 9/11, demand for the book went through the roof. Although the Department of Defense cannot use taxpayer funds to buy copies of the religious book, Pentagon officials wanted millions of copies. It was up to Strength for Service to raise the money and have the books printed.

“The Joint Chiefs of Staff sent letters to us asking if we could get this book published, people started sending checks, the Pentagon asked for a million copies to be sent over and everything started to fall together,” Hunsberger said. “There are so many signs that God was playing a role in this project, because there is now way it could have happened without his help.”

Hunsberger, who graduated from UCLA in 2007, and the Strength for Service Corporation are still working to get the devotional in the hands of service members across the county, but doing so can prove quite costly, which has led them to conduct fundraisers to pay for nearly 3 million copies requested by the Pentagon. Anyone who orders a copy of “Strength or Service to God and Country” for $7 will not only receive a copy for themselves, but another copy will be provided to an Armed Services member.

As Hunsberger continues his work, he hopes that the daily devotional will be used by more than just those in service.

“I want it to be put into use in America also,” he said. “My goal is to have it available over here, and overseas. I think this book is useful to any walk of life, because it is stories of people finding comfort when the odds are against them. Every day you can find something that the passage relates to.”

He added that he intends to continue his humanitarian work.

“I’ll never be able to stop working on it. The project is so much more than an Eagle Scout project,” he said. “The ball is rolling and there is nothing that can stop it.

“I am doing exactly what I want to do – I am honoring my grandfather and my father who gave everything for me and I finally have a chance to give back.”