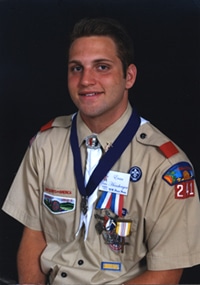 Evan Hunsberger, the California Boy Scout who led efforts to republish Strength for Service to God and Country.

In the years since September 11, 2001, a new generation of American military personnel has been deployed to war zones around the world. In a time of war, those called into the service of others often turn to spiritual resources for perspective and the strength to persevere. As individuals standing in harm’s way by the circumstances of war consider their eternal destiny, published materials that answer life’s tough questions are urgently needed and remain in especially high demand.

Strength for Service was brought back to life in 1998 by an Eagle Scout named Evan Hunsberger. After discovering a worn copy of the volume that had belonged to his World War II Corpsman grandfather, Hunsberger devoted himself to the republishing of Strength for Service. The original book had been published in 1942 by Abingdon-Cokesbury Press, an imprint of the Methodist Publishing House. A popular devotional for armed forces personnel during World War II and the Korean conflict, one million copies of Strength for Service had been distributed before the book fell out of print in the 1950s. Updating its contents only slightly to reflect contemporary language and culture, the newly republished volume remains true to its original spirit while adding reflections and devotions from contemporary religious leaders. Today, Strength for Service is available in three colors and a uniform new typesetting, acknowledging the old while addressing present day concerns. Strength for Service has found an audience in military personnel deployed throughout the world in a time of war; more than 300,000 copies have been distributed since Hunsberger’s original goal was achieved.

Following the attacks of September 11, 2001, the General Commission on United Methodist Men (GCUMM) has been actively raising awareness and financial support to supply a copy to every man and woman serving in the U.S. armed forces worldwide. As steward of the project, the organization has begun developing plans for subsequent versions of Strength for Service that would appeal to public servants and other civilians.

We invite your support and encourage you to purchase a copy of the book, donate to the fund, or host an event to promote the continued publication of Strength for Service at this critical time in our nation’s history. Please view our video of Evan and share it with others. 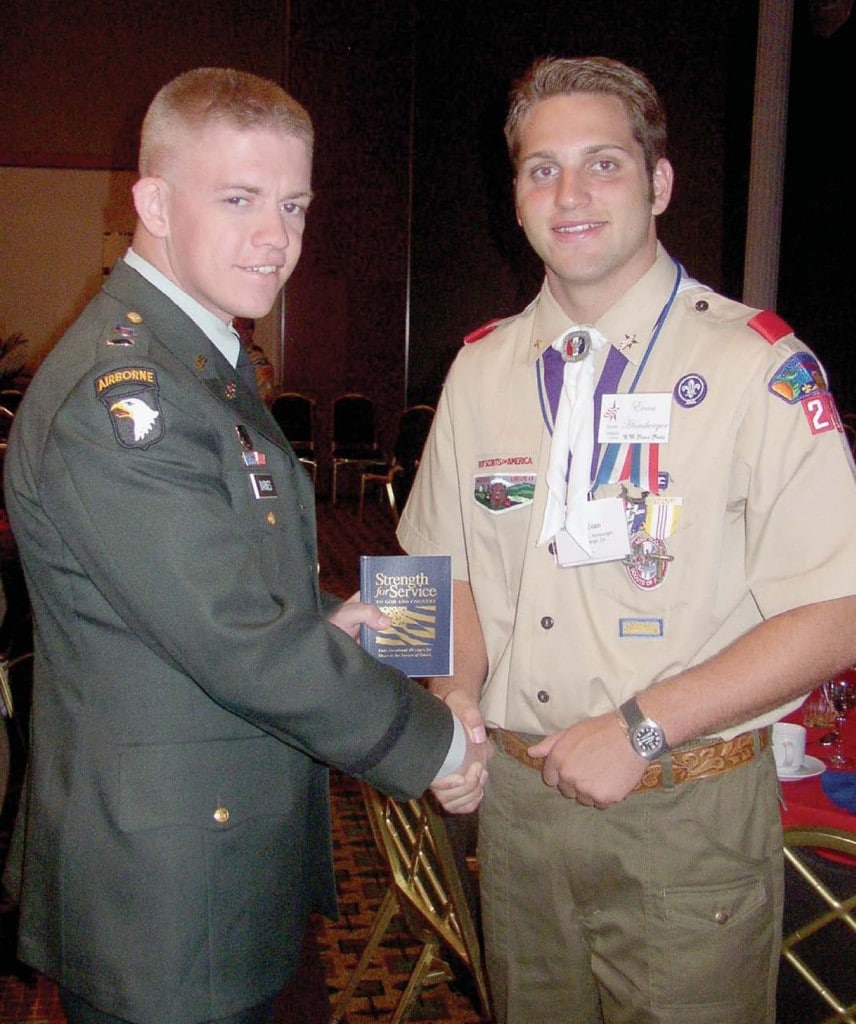 A seven chapter story of Strength for Service

A Catholic Boy Scout’s effort to republish a World War II book of daily devotions and expanded by a United Methodist group, has become a non-denominational ministry to all who give their lives in service to others.

On February 6, 2014 Internal Revenue Service officially granted Strength for Service, Inc., status as a 501(c) (3) “public charity.” Contributions to the organization are now deductible under section 170 of the IRS code.

The remarkable history of Strength for Service began in 1942.

Shortly after the attack on Pearl Harbor and the declaration of war, the Methodist Publishing House wanted to do something to support the thousands of people enlisting in the Armed Services.

The Nashville-based publishing agency asked Norman Nygaard, a World War I Army chaplain, to recruit 365 church leaders of all denominations to write one-page devotions for each day of the year.

The result was the publication of Strength for Service to God and Country, a pocket-sized book of daily devotions distributed to more than 1 million military troops before it went out of print following the 1953 Korean armistice.

In 1969, the Rev. Walter MacGowan remembered the first book and encouraged the Methodist Commission on Chaplains and Armed Forces Personnel to produce a similar book. The group failed to match the first book and ended up with 120 devotions in a book with the same Strength for Service to God and Country title.

Eugene Hunsberger, a corpsman in the U.S. Navy, received a copy of Strength for Service to God and Country while serving in World War II.

He not only read daily devotions for his own spiritual enrichment, but when words failed him, he would read sections of the book to sailors after attending to their wounds. He kept the book during his service in Korea.

Following his discharge, Eugene read the book to his Scout troop at meetings and camp outs.

In his later years, he carried the book in his breast pocket to read to folks in the hospital as a volunteer guild member.

In 1998, Evan Hunsberger, the grandson of Eugene, noticed a tattered copy of the book of daily devotions on the bedside of his grandfather.

In need of an Eagle Scout project, Evan asked his grandfather if it would be a good idea to republish the book as his Eagle project. He thought he could provide copies to Camp Pendleton, the Long Beach Naval Station, and other military installations near their Orange County California home.

The General Commission on United Methodist Men, the agency responsible for scouting ministries, helped Evan secure the publishing rights from the United Methodist Publishing House, and they assisted in adding 50 meditations from contemporary religious leaders to create a second edition of Strength for Service to God and Country.

The commission received the support of the Pentagon and launched a fund-raising campaign resulting in the publication and distribution of 530,000 copies of the updated book.

While distributing most of the 400-page book to military chaplains to give to their troops, some of the copies were also given to fire fighters and police officers. While these public servants were grateful, they were aware the meditations were written for the military. They asked if a volume could be written for them.

In 2013, the SFS team created Strength for Service to God and Community, a 365-page book of daily devotions for first responders and all those in the service of others.

Noting that both books are designed for Christians from all denominations, the commission created a 12-member non-denominational board of directors and secured non-profit status from Internal Revenue Service.

The board elected LW Smith, a Vietnam veteran and a strong supporter of the books, to serve as chair of the board and established a $250,000 budget for 2015. Bobby Wharton, president and CEO of a Memphis, Tenn., company that provides emergency vehicles for first responders, was elected vice president. Ingram Howard, former president of Tennessee Conference UM Men and a retired baking official, was elected treasurer.

The board continues to send military books to chaplains upon request, encourages churches and civic organizations to provide books for members of fire stations and police departments, and rushes books to first responders following shootings and natural disasters.

The story begun in 1942, reintroduced in 2000 and expanded in 2013, has become a promise to future generations.