BIRMINGHAM, Ala.––T. Morris Hackney, a graduate of the U.S. Naval Academy and chief executive officer of The Hackney Group, has agreed to serve on the Strength for Service Advisory Committee. 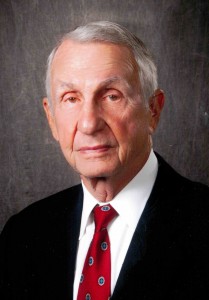 The 10-member advisory committee will suggest ways in which the Board of Directors can increase the circulation of the 72-year-old Strength for Service to God and Country and the newly released Strength for Service to God and Community. The board is seeking ways in which to provide the books of daily devotions free to U.S. service men and women and to police officers, fire fighters and other community servants.

Following his 1953 graduation from the Naval Academy, Hackney served for two years on a destroyer based in San Diego. He then attended submarine school and was assigned to the USS Irex SS482 based in New London, Conn. He retired as a lieutenant in 1958.

At age 26, he joined his father at Hackney Hardware and Supply in Birmingham, Ala. The father-son team slowly shifted the business into the manufacture of chain link fences. By 1967, when Hackney was serving as chief operating officer, the company was renamed the Hackney Corporation, and it was grossing $30 million.

The company was sold in 1972, and his father retired, but Hackney stayed on for two years to manage the business. In 1974, he left Hackney and purchased the Jones Foundry, a ductile iron foundry in Bessemer, Ala. Six years later he created the Citation Corporation, a holding company to purchase additional foundries, and in 1986, he created the Hackney Group to hold non-foundry businesses.

In 1994, Hackney sold Citation to a venture capital company in New York City and he focused his attention on the Hackney Group, the company that held 14 non-foundry businesses with a collective $200 million in revenue.

Hackney now spends his time with three remaining companies in which his family is invested as well as plying golf and serving community organizations. He and his father founded the Hackney Literary Awards, a national competition for original fiction.

“Being successful is simple, but it is not easy,” says Hackney. “I can tell you what you need to do to be successful and you know what you need to do, but doing it has to be consistent over many years and that is very hard. Not many people are up to that task. You do not often fail because of the things you do, but you fail most often because of the thing you do not do.”